Information about the healing meanings of Atlantisite is included with purchase, as well as a pamphlet about the metaphysical meaning of stones & how to use their energy for healing. 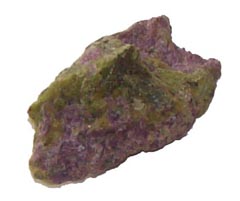 Atlantisite is named after Atlantis, an ancient Greek word meaning “island of Atlas”. Atlantis is mentioned in Plato’s works Critias and Timaeus, both written about 360 B.C. While many believe the story is a myth created by Plato to illustrate his theories about politics, others insist it is based on a historical disaster. According to Plato's account, Atlantis was a major sea power located in the Atlantic.

A green Serpentine stone with pink to purple veins of Stitchtite, Atlantisite is the registered trade name coined by Gerald Pauley when it was first discovered in 1910 - not on the island of Atlantis, but on the island of Australia at Stitchtite Hill in Tasmania. It is sometimes called Tasmanite, but this is actually a different stone from an entirely different mine and apparently of inferior quality. Atlantisite also contains Chromite and Magnetite.

Atlantisite is a beautiful stone that is a combination of Green Serpentine with inclusions of purple or pink Stitchite. Atlantisite has its own special energies, but also has a synergistic energy that includes the healing energy of Serpentine and Stitchite.

An excellent crystal for the Heart Chakra, as well as the Crown Chakra, Atlantisite imparts feelings of security and inner peace. It lends a calm, peaceful atmosphere to any area where it is placed and promotes a relaxed attitude. Additional meanings of Atlantisite include the following:

Information about the Healing Meaning of Stones