Black Merlinite is a name that is used for a number of different crystals, the most common being "Psilomelane" or "Merlinite" which is typically Psilomelane mixed with Quartz. 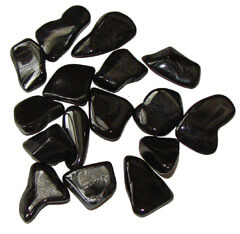 Psilomelane is a group of barium manganese oxide minerals. Black Merlinite is a mixture of several of these minerals but is composed mostly of Romanechite & often banded with gray Pyrolusite. The alternating layers make an attractive stone with a metallic lustre & bands of deep grey & black with silver banding swirling into each other.

Black Merlinite, as its name implies, is a magical stone that is well known & used by shamans, alchemists & other workers of magic. With its dual energy of both earthly &spiritual vibrations, Merlinite can bring a little bit of magic & good luck into your life too. Continue reading about the properties of Properties of Black Merlinite.