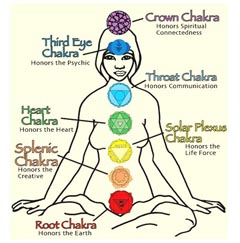 The Crown Chakra is the Seventh Chakra. In the language of Sanskrit it is known as the "Sahasrara" meaning “Lotus of the Thousand Petals”.

The Crown Chakra is considered to be the door to divine universal energy. It takes you far beyond physical worldly things into timeless infinite consciousness. It is the pathway to your higher consciousness.

Identified by Yoga as the Crown Chakra or Thousand Petaled Lotus Chakra, this energy center encompasses the crown of the head, upper brain mass & the ductless glands located within the brain.  Associated with "Macroprospectus" in Kaballah and “Cosmic Consciousness” in western mystical traditions, the Seventh Chakra houses that portion of the Self which endures unchanged through time. While the Soul (centered in the Third Eye or Brow Chakra just below the Crown Chakra) evolves from Life to Life (or Phase to Phase in our development), the Crown Chakra could be viewed as your "eternal potential" & "lasting identity".

The Crown Chakra is associated with the color Violet or White. We use this chakra as a tool to communicate with our spiritual nature. It is through this vortice that the life force is dispersed from the universe into the lower 6 chakras. It has been referred to as our "God Source".  Because this terminology might be confusing to anyone who equates God with religious dogma, it could be called a spiritual connection or communicator. The Crown Chakra is often pictured as a lotus flower opening to allow spiritual awakening in an individual. It could also be considered the well that intuitive knowing is drawn from.

The Crown Chakra is associated with the pineal gland, brain & central nervous system.

It is the body's primary co-ordination center. It ensures a connection to universal sources of energy and with the world as a whole. A balanced crown chakra allows for expanded awareness on an emotional level.

Some signs that the Crown Chakra is out of balance are:

The Crown Chakra is also about wisdom & being one with the world.  When this chakra is open, you are unprejudiced & quite aware of the world & yourself.  If it is underactive, you’re not very aware of spirituality.  You’re probably quite rigid in your thinking.  If this chakra is overactive, you are probably intellectualizing things too much.  You may be addicted to spirituality & are probably ignoring your bodily needs.

Information about other Chakras