Nuummite is a rare black gemstone that was first discovered in 1810 in Greenland by the mineralogist K. L. Giesecke. However, it wasn’t defined scientifically until 1905 by O. B. Bøggild when it was named after the remote, rugged mountain area north of Nuuk in Greenland where it was found. Although Nuummite was only recently discovered compared to most gemstones, it was formed more than three billion years ago - so it is also known as one of the oldest rocks on earth. Deposits of Nuummite have since been discovered in Canada & the United Sates.

A metamorphic rock that is usually black in colour, Nuummite consists of two amphibole minerals – Gedrite & Anthophyllite - which give it its iridescence. Other common minerals included in this stone include Pyrite, Pyrrhotite & Chalcopyrite.

The Metaphysical Properties of Nuummite Stone 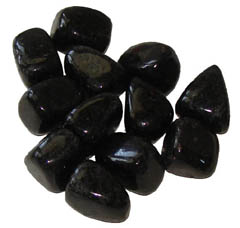 Known as the “Magician’s Stone” or the “Sorcerer’s Stone”, Nuummite has a strongly protective & grounding energy and is said to possess powerful elemental magic. Other metaphysical properties of Nuummite include the following: