Often referred to as the “Stone of Life”, Shungite is an ancient stone that is about 2 billion years old. To date, it has mainly been found in Russia. The main deposit is at Zazhoginskoye near Lake Onega in the Shunga region of Karelia, in the North West of Russia. Two smaller occurrences in Russia have also been found in Kamchatka & Chelybinsk. Other occurrences have been found in Kazakhstan, Austria, India & the Democratic Republic of Congo. 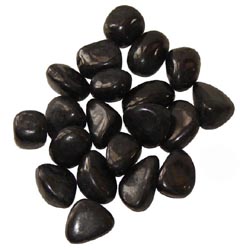 Extraordinarily protective & positive, the powerful vibration of Shungite brings a variety of blessings & is beneficial to a healthy life.  Shungite is apparently the only natural material in existence to contain Fullerenes, powerful anti-oxidants that help neutralize any organism within your body that is harmful to you, including EMF's.

Other metaphysical healing properties of Shungite include: