Purchase other kinds of Quartz

Tibetan Quartz occurs in single and double terminators & may have a few "black spot" occlusions within it. It is mined by hand (often by monks) high in the Himalayan Mountains of Tibet which is a very sacred area on earth.  Although some are found water clear, most Tibetan Quartz are usually grayish clear or cloudy - almost smoky - due to carbon & hematite inclusions. Tibetan Quartz is considered to be one of the most energetically vibrant crystals on earth. 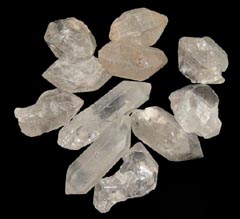 Tibetan Quartz is a very powerful crystal & is considered to be a master healer & teacher.  Tibetan Quartz holds ancient energy frequencies & the wisdom of the ancient culture of Tibet & has an almost holy, enlightened vibration.

This rarefied & yet grounded quartz has a strongly centered energy that passes into the body & the personal self, bringing about deep healing & energizing of the subtle bodies.

Other metaphysical properties of Tibetan Quartz include:

Purchase other kinds of Quartz

Information about the Metaphysical Properties of Crystals