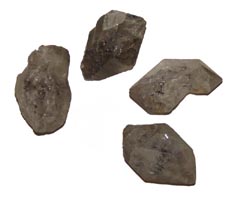 Other kinds of Tibetan Quartz for Sale

Tibetan Quartz is a very powerful crystal and is considered to be a master healer & teacher.  Tibetan Quartz holds ancient energy frequencies & wisdom of the ancient culture of Tibet and has an almost holy, enlightened vibration.

This rarefied & yet grounded quartz has a strongly centered energy that passes into your body & personal self, bringing about deep healing and energizing of your subtle bodies.

Information about the Healing Uses of Crystals