Chlorite in Quartz for Sale 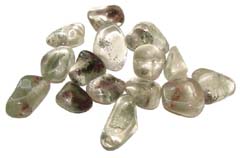 Chlorite minerals are quite common and often coat the surface of other minerals. However, when it forms as inclusions in crystals such as Clear Quartz, it makes the host mineral green and sometimes even has phantom growths. Each one is different and resembles a beautiful underwater coral reef.

Chlorite itself is thought to be one of the most powerful self-healing & regeneration minerals that has a strong connection to Mother Earth. Its cleansing vibration is beneficial for your personal energy field as well as your environment, as Chlorite naturally lifts the vibration of the human organism higher than the lower & denser one of illness.

Green Chlorite in Quartz is a potent healing combination as Quartz is known as a Master Healer and is the most powerful healing & energy amplifier on the planet. The Quartz amplifies the purifying, detoxifying properties of the Chlorite making it one of the very best crystals to use for physical cleansing.

Continue reading about the Healing Uses for Chlorite

Chlorite in Quartz for Sale

Information about the Metaphysical Uses of Stones