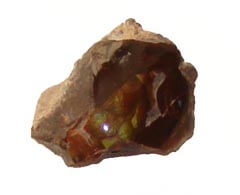 Fire Agate is a rare variety of layered chalcedony quartz which exhibits a fiery iridescent effect. It is a natural gemstone discovered so far only in certain areas of central and northern Mexico & the southwestern United States (New Mexico, Arizona and California).

Approximately 24-36 million years ago, these areas were subject to massive volcanic activity. The fire agates were formed during this period of volcanism when hot water, saturated with silica & iron oxide, repeatedly filled cracks and bubbles in the surrounding rock.

Fire Agate has a translucent deep reddish-brown base, with flashes of orange, red, green & gold that appear as living flames within the gem. Known as the Schiller effect, its iridescent colors are caused by light interference on thin alternating layers of silica & iron oxide or limonite crystals within the Chalcedony.

Fire Agate has a deep connection to the earth. Its vibration is calming, bringing feelings of security & safety. Other healing meanings of Fire Agate include:

Fire Agate also has the healing meanings that are inherent to any form of Agate.

Buy other kinds of Agate

Information about the Healing Meaning of Stones