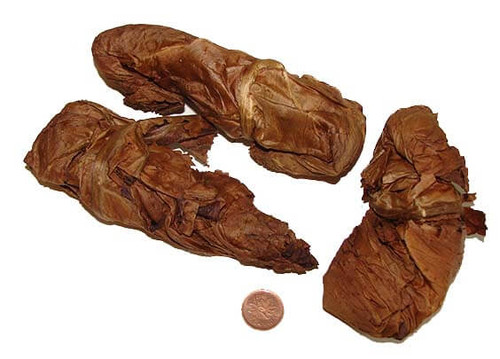 Price is for 1 leaf. Multiple pieces are shown to demonstrate how no two are alike, differing in both size & shape.

Other kinds of Native American Tobacco for Sale

Native American tradition is that each of the four sacred medicine herbs was given to the First Nations people as a means of communicating with our Creator. Tobacco was the first plant to be received and as such is considered to be the most powerful of all medicines. Tobacco is followed by Sage, Cedar and Sweetgrass. It is sometimes thought that Tobacco sits in the Eastern door, Sweetgrass in the Southern door, Sage in the West and Cedar in the North, although these assigned directions may differ from First Nation to First Nation. Together this quartet works to establish a potent connection to the Creator and the Spirit World.

This ceremonial tobacco is Cigar/Fronto tobacco that is grown in Virginia and light fire cured. When we asked my supplier whether it was organic, the following was their reply: "Unfortunately, there aren't any farmers that sell organic cigar tobacco, but we do have a farmer who is trying it out this year. For some reason, it's easier for them to grow organic cigarette tobacco. The Light Fire Cured that you purchase may not be organic, but it is considered all natural as some farmers use a food grade pesticide on all natural tobacco, but absolutely never anything such as Roundup. Some farmers do practice organic farming/growing methods, but since they don't have the money to become certified, they can't claim that is how they do it."