Information about how to smudge included with purchase of any of our smudging herbs. 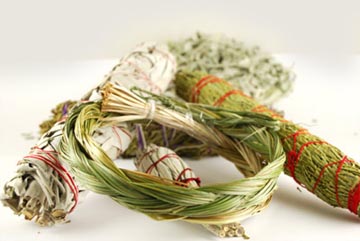 Smudging herbs are not “medicine” in the context of traditional culture, but that of the Native American understanding of medicine which has a much richer and broader meaning.  Native American traditional use of the word medicine means the presence and power embodied in something.  In many First Nations tribes, the word for medicine may connote spirit, power, energy, or mystic potency, with the “medicine man” being someone whose spiritual power is great.  His medicine, whether a prayer or an herb, affects more than illness; it establishes or restores a state or harmony and positive thinking.

Different tribes and traditions use different herbs for shamanic smudging. Some of the most popular herbs include cedar, sage, juniper, pinion pine, sweetgrass, copal (in resin form), mugwort, lavender and sacred tobacco.

It is also not uncommon for people who are carrying out modern-day aromatic sacred smoke ceremonies - cleansing, clearing or energy healing rituals - to combine loose sage leaves with other dried loose herbs. Many believe that burning two or more of the herbs simultaneously is a powerful way to combine the energy of the different herbs in the ceremony, ritual or process they are performing. You will find people using dried White Sage leaves and Mugwort, Cedar, Sweetgrass, or Tobacco (powder or leaf form) from the Native American tradition of the Shamans and people of North and South America. And it is also common to find people combining Sage with Juniper, Lavender, Rosemary or Thyme to create modern day aromatic smoke rituals and ceremonies in accordance with the ancient religions and traditions of their forefathers from other parts of the world.

The following is some information on the most common smudging herbs. 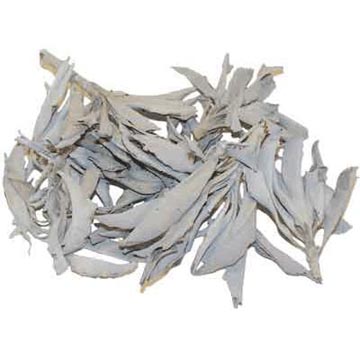 For driving out negativity and for healing, white sage is preferred. White sage is considered sacred by many Native Americans. It can be used to cleanse a space of any evil spirits or negative energies that may be present. This power is said to be released from the plant by the burning of the leaves, which are typically bundled into a wand or stick. Today many Native American tribes still use the stems and leaves for smudging as part of purification ceremonies.

The botanical name for sage is Salvia (e.g. Salvia ofﬁcinalis, Garden Sage, or Salvia apiana, White Sage).  It is interesting to note that Salvia comes from the Latin root salvare, which means "to heal”.

There are many other varieties of sage which are of a separate species.  Included here is Mugwort – see below (Artemisia vulgaris).

Drives out negative energy and brings in good influences. 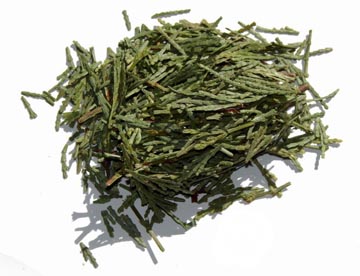 Cedar is burned while praying either aloud or silently. The prayers rise on the cedar smoke and are carried to the Creator.  Cedar branches are brushed in the air to cleanse a home during the House Blessing Ceremony of many Northwest Indian nations.  In the Paciﬁc Northwest, the people burn cedar for puriﬁcation in much the same way as sage - it drives out negative energy; but it also brings in good inﬂuences. The spirit of cedar is considered very ancient and wise by Paciﬁc Northwest tribes, and old, downed cedar trees are honored with offerings and prayers.

Cedar is primarily considered a fire element, though it is often used for general, four-element purposes.  It is known for its sharp, piney scent and is believed to aid clairvoyance, revive the tired mind, body, and spirit, and stimulate contact with Spirit. 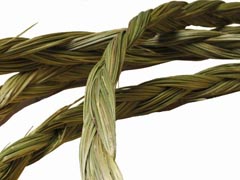 Braided Sweetgrass is made from twenty-one blades of grass.  The braid is said to be the hair of Mother Earth and the three sections of the braid represent mind, body and spirit. The Sweetgrass, once braided, is stronger than any one strand on its own, which symbolizes community and unity. Sweetgrass is also extremely fragrant when dried and burned. It is often used as a form of purification of objects, people or places and can be used on its own or with other medicines.  It can also be used as a gift to give someone to help if they are struggling with different issues.

Sweetgrass is usually burned by shaving little bits over hot coals or lighting the end and waving it around, letting the smoke spread through the air.

Sweetgrass can also put in medicine bundles along with Sage to purify and protect sacred objects. 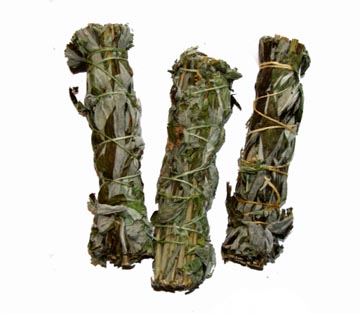 Mugwort is a variety of Sage (Artemisia vulgaris) and is sometimes called Black Sage.

Often regarded as “the traveller's friend”, Mugwort is protective and can be used to promote physical well-being and endurance. Also, when you want to cleanse the atmosphere of your space and need something super heavy duty beyond normal white sage smudging, Mugwort is the herb to use.

This ancient herb is perfect for anyone wishing to develop their conscious or lucid dreaming experience.  Also known as Dream Weed, Mugwort has long been used for its unique ability to stimulate vivid, lucid, and prophetic dreams. Branches can be hung near your bed, or the crushed leaves and flowers can be put in a sachet or pillow to place on or near the bed or under your pillow.   You can also just burn a little before you go to sleep.

Mugwort has a nice smell, which makes it a good herb for smudging.

Mugwort is also used for protection, by hanging the plant over doorways either in whole branches or crushing the leaves and flowers to put in a sachet, often along with other herbs. Mugwort has been worn on the body to protect travellers from wild animals and thieves, and was placed in their shoes to keep up strength while travelling. Some people rub the plant over their ritual tools in consecration or to increase their powers, particularly divination tools.  Mugwort is said to provide safety and protection to those who visit foreign places or venture away from home, and to make journeys more pleasant by eliminating interference in one’s travel plans.

In Native American rituals, ceremonies, and religious observances, tobacco is the unifying thread of communication between humans and the spiritual powers.  The manidog (spirits) are said to be extremely fond of tobacco and the only way they could get it was from the Indians, either by smoke from a pipe or by offerings of dry tobacco. According to tradition, the Indians received tobacco as a gift from Wenebojo who had taken it from a mountain giant and then given the seed to his brothers.

In almost all facets of their lives, Native people of the Great Lakes had reason to solicit the spirits for acts of kindness or to give thanks for past favors. Dry tobacco was placed at the base of a tree or shrub from which medicine was gathered, and a pinch was thrown in the water before each day of wild rice gathering to assure calm weather and a bountiful harvest. Before setting out in a canoe, a safe return was assured by offering tobacco on the water. On journeys or hunts, Indian men paused for a smoke and left a pinch of tobacco as an offering when they encountered certain features of the landscape, including waterfalls, misshapen trees, oddly shaped rocks, and lakes or islands said to harbor spirits. When storms approached, families protected themselves by placing a small amount of tobacco on a nearby rock or stump. Tobacco was placed at graves as an offering to the departed spirit. Requests to elders to relate oral traditions or other special knowledge were accompanied with a gift of tobacco.

Note: Women who are pregnant or nursing or any person with a known medical condition should consult a physician before using any herbal product, especially because of the smoke.